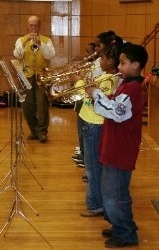 The Mockingbird Foundation provides funding for music education for children, through competitive grants, emergency-related grants, and tour-related grants – more than a million dollars, and counting. Competitive grants are awarded through a two-tiered grant application process that is among the most competitive: We are currently able to fund fewer than 1% of inquiries received (e.g. $40K on $1.4M in inquiries). That’s in part because the need is so widespread, and in part because we are unique in what we fund, differing  from other players in this funding area in important ways:

Without music, life would be a mistake. — Nietzsche