The Mockingbird Foundation, an all-volunteer nonprofit founded and run entirely by Phish fans, has announced eleven new grants totaling $59,650 in support of music education for children. The grants come from Mockingbird’s 20th round of competitive grant-making, include support from several band-related charities, and bring the Foundation’s total disbursements to more than $975,000 – within one grants announcement of a million dollars. 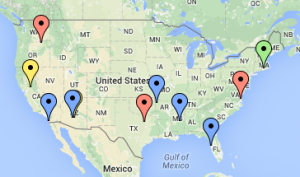 The recipients actually applied during the 19th round last Fall. The opportunity to invite their proposals for this unexpected Spring round was a direct result of financial support that Mockingbird has received from individual donors and partners alike over the last year. And it’s not only a surprise round, but a strong one – among our largest, and notably generous: Nearly half of the grants exceed the amounts which had been requested by the applicants.

Five of the grants have been doubled thanks to funds from the band’s own Waterwheel Foundation. Three were made possible by matching funds from the Kristy Anastasio Manning Memorial Fund. Combined, these partners graciously provided over $21K, in addition to Mockingbird’s $38K contribution. This funding partnership among the three organizations started last fall, and will hopefully augment grants for years to come.

These newest grants support the following programs at schools, centers, and non-profit organizations in nine states, including the Foundation’s first grant in Rhode Island:

These eleven grantees were selected from among more than 877 initial applicants who requested a total of more than $2.5 million, far beyond the Foundation’s resources. Due to such high demand, Mockingbird’s two-tiered online application process remains one of the most competitive in the nation. Each year, we are able to fund a slightly higher percentage of inquiries, making grants slightly less competitive thanks to the generosity of fans. We hope that you will consider making a tax-deductible donation through the Foundation’s website at www.mbird.org so that we can continue to increase the percentage of applicants whom we are ultimately able to fund.

The Mockingbird Foundation is the leading provider of historical information about the band Phish and its music, having cultivated intellectual property through phish.net since 1994. A leading grantmaker in music education for children, the Foundation has now made 285 grants in 47 states, totaling $977,743.40. Proceeds are generated by celebrating the music of Phish through comprehensive books, innovative recordings, special art prints, creative donation premiums, and special events for the Phish fan community. The Foundation has been operated entirely by volunteer fans of the band, without any salaries or paid staff, since its inception in 1996.

For more information about Phish, see the official phish.com or Mockingbird’s own fan-run phish.net.