CarsonNow posted this story on January 9, 2018: 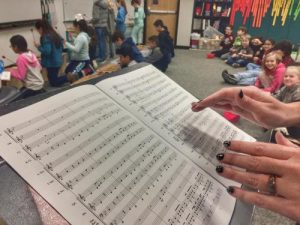 Christina Bourne, Mark Twain Elementary’s music educator, applied for an $8,000 grant, which was later doubled through the Mockingbird Foundation, an all-volunteer nonprofit founded and run entirely by Phish fans. The foundation recently announced 16 grants totaling $137,400 in support of music education for children at schools, centers and non-profit organizations in 15 states.

The grants came from Mockingbird’s 22 round of competitive grant-making and were enhanced by funds from the band’s own WaterWheel Foundation, which allowed the board to double three of the grant requests. Mark Twain Elementary School was one of the three grant requests where funds were doubled.

“We’re tremendously grateful for Ms. Bourne and her continued efforts to bring a skilled and robust musical education program to the students of Carson City,” Richard Stokes, superintendent, said. “Research and other studies continue to demonstrate how arts education enhance academic performance across various subjects including math and an overall improvement in test scores.”

The 16 grantees were selected from 643 initial applicants who requested more than $4.4 million, far beyond the foundation’s resources. Due to the high demand, Mockingbird’s two-tiered online application process remains one of the most competitive in the nation. Each year, they are able to fund a slightly higher percentage of inquiries, making grants slightly less competitive, thanks to the generosity of fans supporting the foundation.

The Mockingbird Foundation is the leading provider of historical information about the band Phish and its music, having cultivated intellectual property through phish.net since 1994. A leading grant-maker in music education for children, the foundation has now made 364 grants, in all 50 states, totaling $1,271,640. Proceeds are generated by celebrating the music of Phish through comprehensive books, innovative recordings, special art prints, creative donation premiums and special events for the Phish fan community.

The foundation has been operated entirely by volunteer fans of the band, without any salaries or paid staff, since its inception in 1996. For more information about Phish, see the official Phish.com or Mockingbird’s own fan-run Phish.net. Tax-deductible donations may be made through the foundation’s website at www.mbird.org