We join friends and family in mourning the loss of Victor Livingston Harris-Millroy, better known as Vic Harris, who was in a serious car accident December 17th. Vic, who shared a birthday with Phish keyboardist Page McConnell, had intended to attend the upcoming Madison Square Garden shows. He fought hard, but succumbed to his injuries and passed December 22nd, devastating those who knew him. He is survived by his mother and beloved twin sister, and funeral services will be held this Friday.

The following words in memorial were shared with us by friend Dan Lewis:

Recently the Phish community lost the life of one of its brightest stars, Victor Harris. He was a loving son and twin brother to his sister. He loved his family very much and they were his first priority in his life. Aside from his mother and sister, his friends and music were the other two most important things in his life. He played the bass and fiddled with guitar and drums, playing in a handful of small bands and endless, friendly musical get togethers. He was a true medium and channel for music and sharing it with his friends, loved ones, and anyone who would listen was one of his greatest passions.

In particular, like for so many of his other friends, Phish was held nearest and dearest to his heart as he shared so many memories and made so many friends in his years of touring and seeing shows. His signature red hair, infectious smile, and radiant positive energy made him unmistakable and one of a kind. Throughout his life but especially at shows, he never wore anything but a huge smile on his face and was loved and revered by a far-reaching number of people in our circle. He was one of the guys who always went to the shows and knows all the other people who are always going. The music of Phish is the tie that binded so many relationships in his incredible life. He gave and shared his energy and love through dancing and positive vibrations with anyone and everyone he would meet on his musical journeys. He saw each show as the greatest gift and truly felt that each one was the best show ever.

His life was taken from us on December 22, 2011, after being in a tragic car accident while working on December 17. With the consent of his family he was able to help save six lives through the gift of organ donation. In his passing, he was able to give so much to so many as he did everyday throughout the course of his life. His upcoming plans were to be where he always was every year. He would be spending the holidays with his family, followed by going to all four nights at Madison Square Garden to be with his friends and see his favorite band. It is safe to say that many hundreds of people who knew him, if not into the thousands of those who had heard and prayed for a fellow phan , will be coming together at Madison Square to celebrate, honor and remember his life. It is inspiring and powerful to think of how wide of an impact one person had on so many members of the fanbase. As always, the coming together as a community and healing through the power of love and music will get us through these difficult times. His spirit will continue to live on through the music via his many friends, the love we all share of him and memories of the endless musical adventures we shared together. 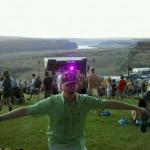